Tremolos are the central focus in this post. And this is the third and final post of my recent posts dedicated to examining string tremolos. I have included more than half a dozen examples, ranging from the middle of the nineteenth century to the early twentieth century, from Mendelssohn to Respighi. As I stated in the previous posts, wisely used, the tremolo can take a simple passage and transform it into magic.

The Fantasia on “Greensleeves” is based on the well known tune, dating from as early as the sixteenth century, possibly earlier. This arrangement is attributed to Ralph Vaughan Williams. It’s from his opera, Sir John. The orchestra score used for this example states that the arrangement is by Ralph Greaves. (For this discussion, assume the orchestration is by the composer.)

Example 67.1 is from the beginning of the middle section of the work. The melody here is based on a tune called “Lovely Joan” and as with “Greensleeves,” it is also a traditional tune. The lyrics do not paint Joan as a particularly nice young woman, but songs about women of ill repute were not uncommon in that age.

The tremolo is played by the violins, each section divided into two parts, at least for the first half of the tremolo section. The score calls for two octaves of open fifths, A and E. The striking introduction is affected by a forte-pianissimo (and the open fifth in the harp), as you can hear in Example 67.1.

One of the interesting features of this tremolo section is that the violins only play open fifths, even as the lines descend from the A-E to the D-A at the end of measure 36. Once each of the violin sections moves to unison at measure 37, the same lines continue from the A-E to the D-A in measure 40. This descending movement of these open fifths functions to keep the background from being static while providing a musical form a scintillation. It also allows the melody to remain in Dorian mode without having to adapt to common major or minor tonalities.

I’ve included a little of the next section so you can hear how the pizzicato eighth notes, divided as they are among the various string sections, provide a stereophonic sound. I have heard the work played in an alternate manner, just by string orchestra with the two solo flute parts played by solo violins. But it’s this version with the two flutes that is probably most commonly known. The addition of these two woodwinds changes the entire texture of the work. As a matter of fact, I’ve spoken with musicians who’ve known the work for years, but are still surprised to learn that it’s played only by a string orchestra with the addition of the two flutes.

Respighi: Fountains of Rome I

The Fountains of Rome is the earliest composed work in Ottorino Respighi’s Roman trilogy. (The other two works are Pines of Rome and Roman Festivals.) The work premiered in 1917.

The passage in Example 67.2 is from the end of the first movement entitled “La fontana di Valle Giulia all’alba” (“The Fountain of Valle Giulia at Dawn”). In this pastoral scene at sunrise, you can hear that the tremolo is played only by the violins. Although Example 67.1 was also only for the violins, this one is somewhat different in that the first violins play their own line while the seconds are divided to produce close triadic harmonies for the passage. However, the tremolo passage has its chords rising, not descending. In some ways it is still similar to the “Greensleeves” example, but in retrograde. 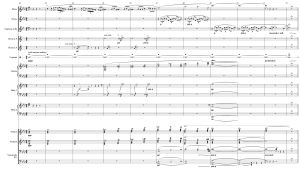 As the example progresses, Respighi adds some little touches that make the sounds from the some of the rest of the orchestra quite interesting. The most obvious are the two horns playing half notes, each with brief pickups enhanced by the harp. Another textural addition here is the composer’s use of the celesta reinforcing the strings after the first three measures. It’s a noticeable, if subtle, decoration to the score and perfect for a movement set at dawn.

In this brief example (67.3) from Mahler’s extended and enormous Eighth Symphony, one can hear how the string tremolo is used, not as the main element, but as an enhancement to the quarter note figures in the flutes (plus a couple of measures of oboe).

To add emphasis and shimmer to the woodwinds, Mahler doubles their parts in the divided first violins and also doubles them in the second violins down an octave. The interesting orchestrational aspect here is the tremolo in the first violins. The sound of the woodwinds is heard most clearly, especially with the violins divided into the parts and, therefore, relatively few strings playing each line.

It’s the unique quality of the tremolo in those first violins that adds that shimmering effect to the already bright flute sound. Although it’s always useful to study scores, Mahler has a way of making small and unusual changes in his orchestrations that add interest and nuance to more standard scoring.

Vaughan Williams: In the Fen Country

In the previous post, Example 66.6 uses the portion of this piece just prior to Example 67.4 here. In that score, in a sound similar to that of Example 67.1 above, the first and second violins have descending thirds, both played tremolo. 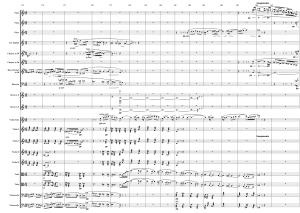 This example, though, offers a few more interesting sounds worthy of note. First, in measures 173 and 174 the violins hand off the tremolo to the divided violas. Because the strings are such a homophonic group, the hand off is almost imperceptible. But then, a couple of bars later, the first and second violin sections have a similar passage in thirds. At measure 181, while the violas are occupied with their own descending solo line, the violins hand off the tremolo third pattern to the divided cellos. Again, here, the change in sections is almost transparent.

A fundamental element of this piece is descending harmonies, often in thirds. The composer exploits this throughout this final section of the work.

There is a lot of busy activity in this portion of Claude Debussy’s ballet, La Mer. I would like to focus on one measure, bar 76. Before we get there, though, the lead-up has duple rhythms in the pizzicato cellos and harps while the violins and violas have chordal tremolos. To this is added the rapid movement (of the waves) in the upper woodwinds. 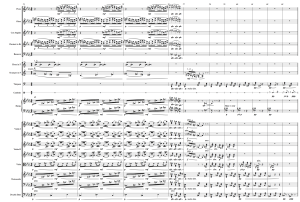 As I stated, it’s a busy passage, but it all leads up to the triple rhythm at measure 76. And, in a fashion similar to the Mahler above, the upper woodwinds play the three quarter notes while the divided strings are playing the same lines using the tremolo.

Note too how the passage sets up the timpani rolls for the next several measures. And then, almost as soon as the climax occurs, the strong unison passage is replaced by the same notes and harmonies, but in this iteration they are played pizzicato by the violins and the muted trumpets. These few measures also provide a good example of a written diminuendo, as the violins begin to cede to all the lower strings, then the violas, cellos and basses, and finally just the basses.

I’ve selected this Strauss passage because of its exploitation of the broadly divided strings playing tremolo lines. In this passage, though, the first violins are playing up in the stratosphere.

Example 67.6 begins with unison violins jumping from the one-line octave to the two-line octave and then the three-line octave, at which point the second violins move to tremolo chords, adding to the sound of the divided violas. What’s most clear to a listener is the extreme heights of the melody (now in thirds) doubled in the flutes. The passage progresses this way until bar 249.

Now the composer essentially reproduces the beginning of the section for the first bar. It’s here that things get weird. (I know that’s not a technical term, but this example is not an everyday bit of music.)

Note that the first violins divide into four voices, each mostly playing tremolos on longer notes between sixteenth note movement to the next half or quarter note. The writing assumes that these performers are top quality players. (As an aside, if you are writing for violins in this register, you should check with the concertmaster or the conductor to make sure they are up to the task.)

The second violins have their own lines, sometimes duplicating the firsts, but down in two- and three-line octave range.

Overall it’s a brilliant bit of writing, but between the problems of the violinists simply getting the notes and playing them in tune, it’s a risky bit of orchestration for all but the best performers.

For the final example, I’ve selected an arpeggio passage that is often overlooked in an extremely well-known piece. Countless couples could probably say that the first piece of music they heard as newlyweds was the Wedding March from Felix Mendelssohn’s incidental music to A Midsummer Night’s Dream.

In Example 67.7, during one of the later repeats of the main melody, the entire string section plays arpeggio eighth notes. In the passage the upper strings (violins and violas) play them as tremolos. It’s difficult to hear some of the portions, but any time you have thirty or forty strings playing the same line, it will be heard.

One piece of the arrangement that is typically taught to composition students is the use of voices moving in opposite direction. Note how the brief pick-up measure (110) has the upper woodwinds, supported by the trumpets moving up a two-octave C arpeggio. Mendelssohn, in counterpoint, has the strings (and bassoons) playing a two-octave C arpeggio, but in the other direction.

This post was the third in the recent series focusing on string tremolos. These three posts have offered examples ranging from Beethoven and Berlioz to Mahler and Debussy. These compositions are mostly well known pieces. Nevertheless, it is frequently surprising to discover new sounds in them.

I hope you enjoyed this post as well as the two previous ones, all examining the use of string tremolos. Feel free to send me a note (my address is on the About page) or leave a comment.

N.B. It’s been a couple of months since my last post and for those who come to this site regularly, my apologies for not posting sooner. I was traveling and my laptop’s logic board met with its demise. Sad, so sad.