The tremolo discussion began in my previous post continues here. These passages show some of the ways the technique can be used for creating a sense of drama, excitement, nobility and mystery. Of course, it is just one of many techniques available to the composer, arranger and orchestrator. Wisely used, however, it can take a simple passage and transform it into magic.

The final tremolo passage presented in the previous post was a passage from the first movement of Alexander Borodin’s Symphony Number 1. Therefore, I thought we’d stay with the same composer and the same piece for the first example in this post. In Example 66.1 you can hear a brief portion of the Andante third movement. This passage comes near the mid-point of the movement. 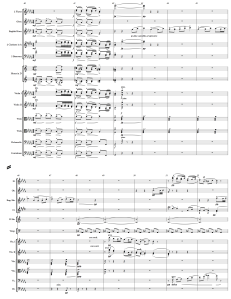 Employed similarly to a passage, seen and heard previously in the Berlioz Symphonie fantastique, 3. Scène aux champs, Borodin uses only the violas behind the solo English horn. The divided violas start with just two voices, playing a major third, and as the English horn solo progresses the sound produced by the violas and their harmonies become richer with three and four note chords until ultimately producing the V7 (A-flat7) on the third beat of measure 47 and resolving on the D-flat chord at measure 48.

The pizzicato contrabasses assist in the statement of this resolution by playing the V and then the I on the downbeat of measure 48. On that downbeat the composer also adds the timpani. And this timpani passage, simply alternating D-flat (I) and A-flat (V) eighth notes, is a far cry from the same kind of timpani passage played, for example, at a forte in a march. In this section the timpani evokes the sound of pizzicato cellos.

Although it might be difficult to hear against the solo English horn, one can notice how the fuller viola sound adds to the excitement through the end of the passage. I’ve included a small portion of the next section (measures 48 through 52) to highlight Borodin’s charming sectional writing. First in the violins in measures 49 and 50, with the bit of oboe on the final beat. Then, in the flutes and clarinet in measures 51 and 52, with the English horn on the last beat. Borodin cleverly works in the cellos on their own ascending line in these two measures.

Before leaving this example, it is useful to view the actual introduction of the tremolo. Note the way the violas enter on the second beat of measure 42. At this point the flutes are sustaining the same notes the violas play on the second beat, but a couple of octaves higher. When the violas do enter on the second beat their chord is reproduced in the clarinets an octave higher. Finally, to punctuate the clarinet entrance – and thereby obscuring that of the violas – all the other strings, save the basses, play a G-flat chord pizzicato. By the time the upper woodwinds stop playing in measure 43, the effect is a sudden tacit and it is after the sound stops reverberating, we become aware of the faint viola tremolos. It’s a traditional, yet effective way to use both sound and silence.

This next example shows how the string tremolo can enhance a line in the winds, even when the two lines are slightly different. In Example 66.2 the tremolo violins and violas have ascending chromatic major triads changing every two eighth notes, moving from D-flat to A before “landing” on the B minor chord on the downbeat of measure 407. And underneath that ascending chromatic line is a pedal F. 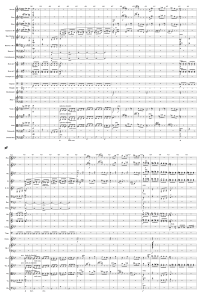 A nearly identical pattern comes up in a few bars, but this time the chords are up a fourth. To add to the excitement here the strings are playing near the bridge (près du chevalet), giving the sound more bite and intensity.

By changing chords every two beats, Dukas is essentially giving the listener a hemiola effect of two against three. To capitalize on this he has the same pattern in the two clarinets. But the clarinets play the outer notes of the chord on the first eighth and the middle note of the chord on the second eighth. The resulting sound is one that is both biting and disconnected (tremolo strings) but simultaneously legato in the clarinets. The syncopation adds to the brief chromatic ascending line’s excitement.

In complete contrast to the Borodin in Example 66.1 above, this brief excerpt from Mendelssohn’s incidental music to Shakespeare’s Midsummer Night’s Dream begins with just the tremolo strings beginning in root position triads played by the second violins, the violas and cellos.

This is the beginning of the Allegro appassionato that intended to be played at the end of the second act of the play, when Hermia and Lysander, one of the two mixed-up pairs of lovers, get lost in the woods at night.

There are several items to note in this passage. First and most prominently is the use of the first violin (doubling the oboe) to trade short motifs with the flute and clarinet. Many examples of tremolo are an all or nothing use of the device for the strings. Here though, Mendelssohn completely divorces the first violins from the seconds, violas and cellos.

The other device the composer uses is the introduction of the pizzicato basses on the alternate measures and not on the accented ones. Mendelssohn, still very much influenced by the standards of his day, makes sure that the basses are doubled in the cellos, even the tremolo cellos.

It’s a deceptively simple passage. The tremolo creates excitement, but quietly and without drawing attention to itself. (Perhaps that’s why they call it “incidental” music.)

Sibelius: The Swan of Tuonela

In a previous post (64. Divided Strings), we heard the opening to Sibelius’s The Swan of Tuonela. The focus was on the broadly divided strings as backdrop to the solo English horn. That passage was sustained strings only with nary a tremolo in sight. Example 66.4 is from a little later in the work and the upper strings are still quite divided, but now they are all tremolos. 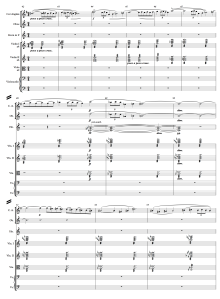 At the beginning of the example you hear just the first violins, mostly in the 2 line octave, playing chords in close harmony. After a couple of measures, the second violins, also divided in 4, enter an octave lower. The entire passage builds to a peak towards the end of measure 48, when, not  coincidentally four muted horns enter along with divided and tremolo violas to enhance the climax. At this point the English horn hits its high C and Sibelius doubles the line for the next couple of measures with the oboe.

These large block chords of tremolo strings contrast dramatically with the sustained chords at the opening. The effect builds tension and allows the strings to adds intensity with their strong bowing. As for the introduction of the four muted horns, given the alternatives of bass clarinet, bassoons and three trombones, Sibelius makes the wise choice  because of the way they blend in their middle range with the violas, cementing the bottom end of the Tristan chord-like harmony.

A frequent tool for an orchestral crescendo is to add additional sections to the sound. In fact, that is one of the techniques the composer uses in the opening measures. The same technique is used conversely for a decrescendo, dropping instruments and/or sections from the mix. Hence, it’s of note that in Example 66.4 the five measure diminuendo, after the horns and oboe go silent, is mainly affected by the use of dynamics in the strings.

Bax: The Garden of Fand

To take the widely divided string concept a large step further, listen to a passage from Arnold Bax’s The Garden of Fand. In Example 66.5 the divided strings are not just playing block chords. Instead, they are playing several counter melody lines in a large tonal range, from the small octave to the upper range of the violin up at 4 line C-sharp.

As you can see and hear the first and second violins are each divided in three parts while the violas and cellos are divided in two. One of the noteworthy items in this passage is the way the string section sneaks into this rich multipart writing. There’s no bass pizzicato, no accent from anywhere. It’s simply the ascending eighth notes in flute and the English horn entering after the solo violist ends. And when the two winds arrive at the expressive melody at measure 245, the strings begin their busy and soft tremolo lines.

It’s a novel sound that is enhanced by the inclusion of more woodwinds and eventually horns as the passage continues. Perhaps the most interesting thing about this passage is how the score can visually be deceiving. When reading it without hearing it played, it can appear as though the strings are the main act. In reality, in this recording at least, with all that busy work, the strings are there to support the woodwind tune.

Vaughan Williams: In the Fen Country

Ralph Vaughan Williams frequently divided his strings and In the Fen Country is no exception as you can hear in Example 66.6.

The violas and cellos provide the harmonic and rhythmic background to solos in the horn and oboe. Once the clarinet and trumpet enter at measure 164, the upper violas sustain a high F. This is the entrance of the divided first and second violins playing block chords, mainly in 6/3 inversions. These slowly descending chords, some consonant, some dissonant, work their way down in this example for two octaves. Note that in the last measure, the lower violin parts go too low for the second violins, but Vaughan Williams seamlessly hands those voices over to the violas.

This entire backdrop continues through an English horn solo, a horn solo, a clarinet solo and eventually to a line in the cellos with bass clarinet added at measure 173. If you’re familiar with this work, you’ll note that this descending, somewhat chromatic chordal line is used earlier in the work. In this example, he reprises it to useful effect behind the wind solos

Way back when I was a teenager, the British Invasion hit the United States. I remember buying each Beatle album the moment I could, taking it home and analyzing the tunes and harmonies. As I recall, in their second movie, Help, there was a scene that used the prelude to Act III of Lohengrin as part of the score. 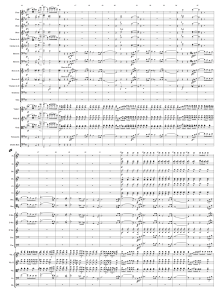 In Example 66.7 you get another variation of tremolo in the violins and violas. In this case, they are virtually the entire background to the dynamic tune played by the bassoons, horns and cellos. Upon its repeat, the trombones and tuba are added to that melody as the upper woodwinds and the trumpets double the tremolos of the upper strings.

One thing to notice is that the tremolos are not static, the voices move as the harmonies change for the melody with some arpeggios thrown in to echo those in the low end of the orchestra.

I suppose what is most striking is the way the composer drops out almost all of the orchestra that had been playing right on the downbeat of measure 16 as the violins and violas hit their unison D, immediately moving to the harmonized tremolo. It’s another example of how dramatic the introduction of the tremolo can be when it suddenly makes its appearance.

This post has offered a variety of tremolo examples in composers as varied as Mendelssohn and Wagner to Sibelius and Dukas. Each one takes his own unique approach to writing passages that employ the tremolo technique.

My review of some of the varieties of tremolos will continue in the next post with a few of these same composers and some new ones.

I hope you enjoyed this post. Feel free to send me a note (my address is on the About page) or leave a comment.